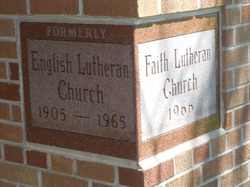 In 1917 English Lutheran and some of the people from Wood River became one parish. The rest of the congregation joined with St. Olaf and became a new parish known as Bethany Evangelical Lutheran Church.

In 1924 English Lutheran and Bethany began sharing a pastor.

In 1960 First Lutheran (better known as Swedish Lutheran) passed a resolution to join with English Lutheran.

In 1961 it was decided that a bigger building was needed. By 1965 the vote to build a new building was passed, and ground was broken on our present site August 11, 1965. At the annual meeting in January of 1966, the decision was made to change the name of the congregation to Faith Lutheran.

In October of 1975 we began airing our worship service on WCMP out of Pine City. This wonderful outreach ministry continues today on 100.3 FM.

In 1993 discussions were held about expanding the building. In the fall of 1995, ground was broken for the addition which doubled the space in the social hall, added a council room, a youth and family ministry office, 3 rooms for Christian Education, ample storage space and a room for choir robes and music.

In January 2000 it was decided that both Bethany and Faith were each large enough to have their own pastor. Each congregation is now independent and each has their own full time pastor. Both congregations expressed gratitude for their many years together.

Having been organized by Norwegian immigrants, Faith Lutheran has grown in membership and become a much more heterogeneous congregation. With a strong sense of mission, we march into the future thankful for more than a Century In Christ.